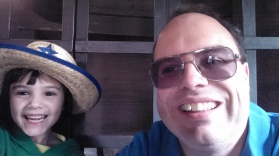 Jim lives in Chesapeake, Virginia with his wife Kim, and daughters Laura and Marissa. By day, he works as a Systems Administrator for the government and runs his own side Information Technology consulting firm, EJB Networking, which can be found at www.ejbnetworking.com

Blessed (or cursed depending on your point of view) with an overactive imagination, Jim has long been a fan of Science Fiction and Fantasy. Seeking to put that imagination to use, he has started to write his own original works in hopes of making his mark on the literary world.

Jim's literary influences include well known writers such as Robert Heinlein, Edgar Allen Poe, J.R.R Tolkien, and the not so well-known C.T. Westcott.

Books Jim has written and collections/anthologies he has published.

Here's where you can enter in text. Feel free to edit, move, delete or add a different page element.